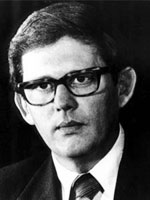 William John Janklow’s father Arthur was a prosecutor of Nazi officials at the Nuremburg Civil Trials in Germany during the aftermath of World War II. In 1950, after Arthur died, his wife LouElla moved their six young children back to Chicago and eventually to her hometown of Flandreau, S.D. A self-avowed juvenile delinquent, Bill Janklow dropped out of high school during his junior year and joined the United States Marine Corps. He was honorably discharged in 1959. In 1960, he married Flandreau native Mary Dean Thom. Together they raised three children: Russell, Pam, and Shonna. After receiving his Juris Doctorate from the University of South Dakota in 1966, Janklow became a lawyer for Legal Aid Services on the Rosebud Reservation.

Voters elected Janklow attorney general in 1974, governor in 1978, 1982, 1994, and 1998, and the state’s sole member of Congress in 2002. He served 16 years as governor, twice as long as any other person to hold that position. His service as governor spanned four decades. He was 39 when voters first elected him governor; he was 63 when he left that office.

During his first two terms as governor, Janklow kept his campaign promise of “Putting the Taxpayers First”, made state government smaller, more innovative, and more efficient, doubled state aid to local schools, helped save the state’s farm-to-market railroads, created and funded the state’s first comprehensive water development plan, changed the mission of Dakota State University to a nationally acclaimed computer school, established a “Workfare” program that led to national welfare reform, converted the University of South Dakota at Springfield into a minimum security prison where inmates learned marketable job skills, and, literally on a handshake, brought Citibank and other financial service companies to South Dakota, broadening the state’s economic base.

Janklow’s mother LouElla, who served as a Christian missionary nurse in Africa, frequently told her son, “Bill, sometimes you are right, sometimes, you are wrong, but you are never in doubt.” One thing not in doubt is Bill Janklow’s legacy, which can be expressed in four words: “He got things done.”

Janklow was honored in 2013 by the Trail of Governors with a life-size bronze statue by sculptors Lee Leuning and Sherri Treeby, who Janklow had commissioned to create the state’s World War II Memorial. The statue recalls Janklow’s personal direction of disaster response, portraying him in a South Dakota Highway Patrol jacket with a bullhorn in his hand. It was placed on Broadway Avenue, near the entrance to Capitol Lake and the war memorials.