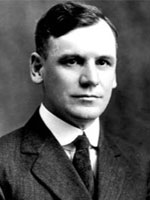 William H. McMaster was born in Ticonic, Iowa in 1877 and was raised in Sioux City. Orphaned at 17, he graduated from Sioux City High School and from Beloit College in Wisconsin. While at Beloit, McMaster met Harriet Russell, whom he married in 1902. The McMasters had two children, William Jr. and Dorothy.

Governor McMaster led South Dakota through the post-World War I era of plummeting grain prices and falling land values, which led to a wave of farm foreclosures and bank failures. McMaster suspended foreclosures on state rural credit loans to farmers who made honest efforts to repay. He took on high retail gasoline prices by selling gasoline from state highway shops for 2 cents per gallon above wholesale cost, forcing retail prices down by as much as 10 cents a gallon.

McMaster oversaw the construction of the state cement plant in Rapid City, and supported a 1-cent gasoline tax to finance highway and bridge construction. During his administration, five Missouri River bridges were constructed, as well as the first concrete state highway, which connected Dell Rapids to Sioux Falls.

In 1921, McMaster vetoed a bill that would have increased the expense allowance for state legislators, because the bill had originally authorized construction of a hog barn and Brookings and had been significantly amended. This was the state legislature’s first “hoghouse” amendment.

In 1924, McMaster was elected to the U.S. Senate, where he joined Norbeck as an advocate for farmers and progressive causes. Following the 1929 stock market crash, McMaster was defeated for reelection in 1930 by Governor W. J. Bulow.

In 1933, McMaster moved to Dixon, Illinois, to assume management of Dixon National Bank. The bank’s owner, Charles R. Walgreen, who was the founder of the national drug store chain, recruited McMaster to Dixon because he believed his stature as a governor, U.S. Senator, and longtime banker would reassure depositors of the bank’s solvency. McMaster retired as bank president in 1946, and continued as bank chairman until 1964. He died in 1968 at the age of 91, the longest lifespan of any South Dakota governor.

McMaster was honored by the Trail of Governors in 2018.  The life-size bronze statue by sculptor James Van Nuys, placed at the intersection of Pierre Street and Sioux Avenue in downtown Pierre, portrays McMaster seated on a park bench.  A gasoline can at McMaster’s feet recalls his efforts as governor to take on “unconscionable” retail gasoline prices.