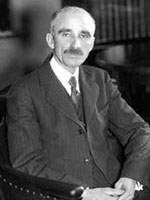 Green was born on March 10, 1869 on his family’s farm in Jackson County, Wisconsin. He came to South Dakota with his family as a twelve-year-old, eventually settling in Hamlin County, and graduated from Watertown High School. He married fellow Hamlin County native Elizabeth Parliament in 1899, and the couple had four children: Maxwell, George, Mildred and Edson.

However, because no candidate won 35% of the vote, the State Republican Convention decided the Republican nomination. After several deadlocked votes, the delegates nominated Green as a compromise on the 12th ballot, and he won a close election victory in November. At 61 years of age, Green was the oldest newly-elected governor in state history.

Governor Green withstood a primary challenge from former governor Carl Gunderson in 1932, but lost reelection to Democrat Tom Berry amidst the 1932 Democratic landslide that elected Franklin D. Roosevelt as President. He returned to his Hamlin County farm, where he died in 1945.

Green was honored in 2016 by the Trail of Governors with a life-size bronze statue by sculptors Lee Leuning and Sherri Treeby. The statue, placed on the State Capitol grounds near the intersection of Nicollet Avenue and Broadway Avenue, evokes the “Dirty Thirties” era, with several grasshoppers placed on the statue and Green clutching his hat as his jacket and tie are blowing in a strong wind.