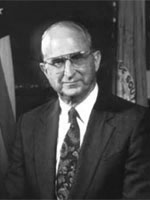 Governor Walter Dale Miller was South Dakota’s 29th governor, serving from 1993 to 1995. Governor Miller was born on Oct. 5, 1925 in the unincorporated community of Viewfield in Meade County, South Dakota, near the town of New Underwood. His grandfather arrived in Fort Pierre, Dakota Territory in 1881, where he worked Wagon Trains on the Ft. Pierre-Deadwood Trail for five years, before he homestead in the Viewfield area in 1886. Miller graduated from New Underwood High School and attended college at the South Dakota School of Mines and Technology while still active on the family ranch. Miller married Mary Randall in 1943, and they had four children: Nancy Burma, Karey Albers, Walter R. “Randy” Miller, and Renee Johansen. Mary died in 1989. In 1993, Governor Miller married Patricia Caldwell, and became the step-father to her two children, Cade Caldwell and Rebecca Caldwell Bauer. His marriage to Pat made him the only governor to be married while in office.

Miller had more years of experience in elected office than any other governor. He served for 20 years as a school board member and was a leader in the Republican Party. Miller served in the State House of Representatives for 20 years. He is the only person in the history of the state to serve as Majority Leader, Assistant Majority Leader, Majority Whip, Speaker of the House, Speaker pro Tempore, and President of the Senate.

In 1986, George S. Mickelson invited Miller to be his running mate. After the Mickelson-Miller team was elected, Miller made history when he became the state’s first full-time lieutenant governor. That experience became important on April 19, 1993, when Governor Mickelson died with seven others in a crash of the state airplane. Miller was the first lieutenant governor in South Dakota’s history to succeed to the governorship upon the death of his predecessor. At the age of 67, he was also the oldest governor in state history.

Governor Miller demonstrated his ability to be “cool in a crisis.” He led the state through the sudden and tragic loss of Governor Mickelson, and secured funding for the creation of the Fighting Stallions Memorial. He ended a riot at the state penitentiary, in which over 200 inmates took control and set fire to prison buildings, without loss of life or giving into the inmate’s demands. He responded to historic flooding of the Missouri River and its tributaries in 1993. And when the State Supreme Court declared video lottery to be unconstitutional, Governor Miller responded to the sudden budget shortfall with $28 million in emergency budget cuts and the use of emergency reserves.

Governor Miller was one of only four governors from West River. After leaving office in 1995, he continued to be active in his family’s ranch, while residing in Ft. Pierre. Miller died on September 28, 2015 while visiting Dallas, Texas. He was interred at Viewfield Cemetery, near his ranch.

Miller was honored by the Trail of Governors in 2012 with a life-size bronze statue by sculptors Lee Leuning and Sherri Treeby. The statue, which portrays Miller in a cowboy hat and western wear and holding his ranch’s “seven lazy reverse seven” branding iron, stands in a bed of native grasses. It was placed on the corner of Capitol Avenue and Highland Avenue near the historic St. Charles Hotel, where Miller resided as lieutenant governor.

Ode To An Old Cowboy

It was last Saturday morning
that he started his last long ride,

He crossed through the peaceful
valley and on to a great new divide,

As he passed amidst the shadows
he was not alone as he rode,

For he was stirrup to stirrup
with a Friend with whom he had long abode.

The trail will soon vanish,
but his memories no one will ever hide,

His earthly chores he had finished
and his work here was all done,

His Friend was softly speaking,
“your race was well run.”

As he rides the hillsides of glory
old acquaintances he will renew,

His work now is in that “Big Roundup”
on that range beyond the blue.

For those of us still waiting
our “Golden Spurs” to receive,

His last chant still echoes
across the valley: “Only believe.”

He has joined that “Big Outfit”
of old cowboys with hearts kind and true,

The “Head Foreman” said to him,
“Come, I’ve got greater things for you to do.”

There is an empty spot in many hearts tonight
and somewhere a Pinto’s head hangs low,

His old spurs and chaps hang on the wall –
he has gone where real cowboys go.

Someday he will return for that “Great Gathering,”
led by the “Champion of Love,”

And those of us who are watching and waiting
shall ride again forever with him above.

By Walter Dale Miller
For his father, Walter Miller ~ March 1983

“Did it hurt much?” asked his buddy.
“Naw, it just stung a little bit.
It’s over in a matter of seconds,
Before you know it, they’ve done quit.

It was nothing compared to other times,
When I thought I’d nearly die.
Like when my mama had me,
On that cold and stormy night.

I came a little early,
And laid in the wind and snow.
I just knew I’d freeze to death,
I was shivering from the cold.

But, right away the cowboy found me.
You know, the one that feed us every day?
He picked me up so gently,
And put me inside in warm, dry hay.

He brought my mama, too.
And made sure I was alright.
I never was so thankful,
To see a cowboy than on that night!

Of course there was that time in spring,
When we started eating sweet, green grass.
My ears were dropping low,
And I sure got sick real fast.

That cowboy came a ridin’,
On a big long-legged beast.
He saw that I was feelin’ bad,
And rode over to doctor me.

Of course, he had to rope me,
Which my mama didn’t like too much.
But I started feelin’ better,
After he gave me those pills and stuff.

And do you remember a couple of weeks ago,
When they moved us a real, long way?
We all go sort of jumbled up,
As we walked along that day.

I lost track of my dear mama.
Boy I was one scared pup!
But that cowboy helped me find her,
And made sure we were all paired up.

So you can see, I’ve had many trials,
In my first few months of life,
But that cowboy’s always been there,
To help me in my strife.

I feel I’ve earned this on my side,
Given to me by my special man.
And I am darned sure proud to wear
This cowboy’s mark he calls a brand!”