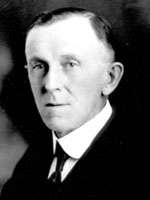 William J. Bulow was born on his family’s farm near Moscow, Ohio in 1869. He attended local schools, but dropped out as a teenager, believing he had all the education he needed. When Bulow attempted several years later to enroll at the University of Michigan to study law, he tricked the dean into admitting him by having his history teacher take the required examinations in his stead. The ruse worked, as he earned his law degree in 1893.

That same year, Bulow came to South Dakota. He initially practiced law in Sioux Falls with Joe Kirby, one of the state’s leading attorneys, before opening his own practice in Beresford in 1894. In 1898, Bulow married Katherine Reedy, and they had three children: Maurine, William Jr., and Kathleen.

Bulow served one term in the state senate, and one term as mayor of Beresford. He was also the Beresford city attorney and served on the school board and as a county judge. In 1918, Bulow’s wife, Katherine, passed away. Three years later, he married Mrs. Sarah Farrand, a Beresford widow who operated a millinery and clothing business.

In 1924, Bulow’s good friend and neighbor, Andrew S. Anderson, was the Democratic nominee for governor. Six weeks before the election, Anderson was trampled to death by a roan bull that went berserk. Bulow was persuaded to take Anderson’s place as the nominee, and he lost the election to Republican Carl Gunderson. Two years later, Bulow challenged Gunderson again, winning in a rematch that made him South Dakota’s first Democratic governor.

As a conservative Democrat, Governor Bulow enjoyed the support of many progressive Republicans, retained many Republican appointees, and attempted to run a non-partisan administration. He insisted on a balanced budget, vetoing a budget that overspent and calling a special legislative session to pass a revised budget bill. Governor Bulow created a commission to create a World War I memorial, leading to the construction of the Soldiers and Sailors World War Memorial building. He also pardoned “Poker Alice” Ivers, the colorful Deadwood madam, after she was convicted of bootlegging and operating a brothel at the age of 77.

In the summer of 1927, Governor Bulow welcomed President Calvin and Grace Coolidge to the Black Hills, after Senator Norbeck successfully led an effort to make the State Game Lodge Coolidge’s “Summer White House.” State officials’ efforts, including improvements to the State Game Lodge and stocking thousands of trout in a nearby creek, led Coolidge to extend his stay from three weeks to three months. Custer State Park’s Sheep Mountain and Squaw Creek were renamed “Mount Coolidge” and “Grace Coolidge Creek” in honor of the visit.

In 1942, Bulow was defeated in the Democratic primary by former Governor Tom Berry, a fellow Democrat who strongly supported President Roosevelt. Bulow remained in Washington DC, where he joined a law firm. He died in Washington in 1960.

Bulow was honored by the Trail of Governors in 2022.  The life-size bronze statue by sculptor James Van Nuys is placed in an alcove on Pierre Street, between Pleasant Drive and the railroad bridge.  The statue portrays Bulow waving his hat, as he leans on a pediment decorated with images representing his life and career, including: