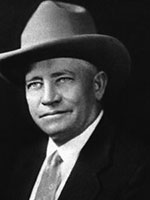 Governor Thomas M. Berry was born in Paddock, Nebraska in 1879 and attended public schools in O’Neill, Nebraska. In 1905, he married Lorena McLain and they had four children: Baxter, Nell, Faye, and Paul.

Berry came to South Dakota as a young man, first to Gregory County and then in 1912 to a homestead south of Belvidere in Mellette County. Eventually Berry built his ranch to 30,000 acres, raising Hereford cattle and saddle horses under his “Double X” brand.

Berry served in the State House of Representatives from 1925 to 1931, chairing the livestock committee and the Indian affairs committee. He also served on the Custer State Park board. In 1932, Berry challenged incumbent Governor Warren E. Green and was elected in the Democratic landslide that also elected Franklin D. Roosevelt as president. Berry was reelected in 1934.

Governor Berry was the first governor from West River, and he was known for his folksy, western humor. He took office during the depths of the Great Depression, as massive dust storms created “black blizzards” on the South Dakota plains. Wielding an axe to demonstrate his intentions, Berry cut state spending 25% and ended progressive programs such as the state coal mine, state hail insurance, and the state bonding department. He eliminated the state property tax, created a state income tax, and instituted a state ore tax to take advantage of the Homestake Gold Mine.

Governor Berry was the only governor in the country to personally direct federal New Deal programs in his state. Berry directed the construction of a new Governor’s Mansion on Capitol Lake, as well as hundreds of stock dams throughout the state. After prohibition was repealed, Berry called a special session to write new alcohol laws and institute a tax on alcohol.

Berry sought an unprecedented third term in 1938, but was narrowly defeated by Republican Leslie Jensen. Berry returned to his ranch and ran unsuccessfully for the U.S. Senate in 1938 and 1942. He eventually retired in Rapid City, where he died in 1951. He was interred at Belvidere Cemetery.

Berry was honored in 2017 by the Trail of Governors with a life-size bronze statue by sculptor John Lopez. Berry is standing at this neighbor’s property line with his arm on a fence post holding his trademark axe while discussing cutting the state budget. Berry is located at the intersection of Pierre Street and Dakota Avenue in downtown Pierre.