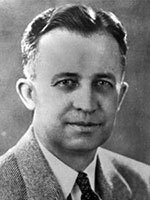 Governor Sigurd Anderson, one of two South Dakota governors to be born in another country, was born in 1904 in Arendel, Norway. He came with his family to the United States at age three, and settled in Lincoln County near Canton. Anderson attended rural schools and graduated in 1925 from Augustana Academy, a Lutheran high school in Canton. Anderson didn’t speak English until he attended school and struggled to overcome his Norwegian accent, but later remarked that “a little Norwegian went a long way with South Dakota voters.”

Anderson graduated from the University of South Dakota in 1931 and, after teaching history at Rapid City and Webster, returned to USD and earned his law degree. In 1937, Anderson married Vivian Walz. The couple had one child, Kristin.

After law school, Anderson returned to Webster where he opened a law practice. He served as Day County State’s Attorney and as an assistant attorney general. Anderson suspended his practice from 1943 to 1946 to serve as a legal officer in the U.S. Navy during World War II.

Anderson returned from his war service and was elected Attorney General in 1946. He led an effort to target illegal gambling in Deadwood, and was a witness to South Dakota’s only execution by electric chair.

In 1950, Anderson won a competitive Republican gubernatorial primary, and defeated Democrat Joe Robbie in the general election that fall. As a former teacher, Anderson dramatically increased state funding for public schools. He promoted continued development of the Missouri River, serving as chairman of the Missouri River States Committee. Anderson led the state through huge blizzards in 1951-52 and massive floods the following spring, using Air Force planes to airdrop hay to isolated cattle. And he held a “mortgage burning” to celebrate the retirement of the $57 million state debt from the failed Rural Credits program. In 1952, voters reelected Anderson with more than 70% of the vote – the largest share until that time.

After leaving office, Anderson was appointed by President Dwight D. Eisenhower to the Federal Trade Commission, on which he served until 1964. Anderson sought a return to the Governor’s Office in 1964, losing the primary narrowly to Lt. Governor Nils Boe. In 1967, he was appointed a state circuit judge, serving in Webster, and held that position until 1975. Anderson died in 1990 and was interred at Webster Cemetery.

Anderson was honored in 2017 by the Trail of Governors, with a life-size bronze statue by sculptor James Michael Maher and placed on Capitol Avenue near the Sigurd Anderson Building. Anderson is holding a microphone waving at the crowd.