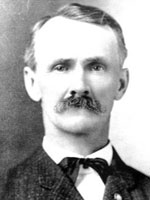 Samuel H. Elrod was born on his family’s farm near Coatesville, Indiana in 1856. He attended school during the winters, and earned his law degree from Asbury College, which today is known as DePauw University.

Elrod was a member of the same college fraternity as Arthur C. Mellette, and on Mellette’s advice he relocated to Watertown, Dakota Territory in 1882. He remained a close friend of Mellette, and after substituting for Mellette as a Fourth of July speaker in Clark, decided to establish a law practice in that city in 1884. That same year he married Mary Ellen Masten and they had two children: a daughter, Barbara, and a son, Arthur Mellette Elrod.

Elrod became active in local politics, attending the 1883 state constitutional convention and serving in several local offices. He served for eight years as the federal agent to the Sisseton-Wahpeton tribe. In 1904, Elrod won the nomination for governor as a representative of the conservative “stalwart” faction of the party, defeating former attorney general Coe I. Crawford, a progressive. That fall, he was elected in a landslide, the first of only two governors to win in every county in the state.

Governor Elrod initiated construction of the permanent State Capitol Building in Pierre and acquired 85 acres in Huron to serve as the permanent fairgrounds for the South Dakota State Fair. Although he resisted progressive proposals for direct primary elections, he adopted more aggressive railroad regulations and enacted reforms at the state penitentiary, including the first “prison industry,” a state twine plant.

In 1906, Elrod faced a rematch with Crawford for the Republican nomination, and this time he came up short. He is the only governor to fail to be renominated in a bid for a second full term. Following his loss, Elrod returned to his law practice and farming operation in Clark. He once again ran for governor in 1910 as a “stalwart” Republican, losing in the primary Governor Robert S. Vessey, the incumbent and a progressive Republican. Elrod died in Clark in 1935 and is interred at Rose Hill Cemetery. The unincorporated city of Elrod, in Clark County, is named in his honor.

Elrod was honored by the Trail of Governors in 2019.  The life-size bronze statue by sculptor James Van Nuys was placed in the capital city at the corner of Capitol Avenue and Euclid Avenue, near the historic St. Charles Hotel.