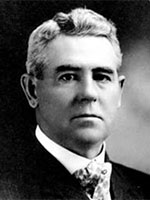 Robert S. Vessey grew up on his family’s farm near Oshkosh, Wisconsin, where he attended common schools and briefly enrolled in Oshkosh Commercial College. His father, Charles, was a lay Methodist minister who emigrated from England along with his wife, Jane Elizabeth. Beginning at age 16, Vessey worked for five years as a lumberjack in northern Wisconsin, then, after traveling to Kansas and Texas to work as a laborer, returned to Wisconsin as a lumber crew foreman.

Vessey married Florence Albert, whom he met when she worked for her father in 1882. The following year, the Vesseys left Wisconsin for a squatters claim in Jerauld County, South Dakota, where they raised sheep and constructed a house. Vessey was an imposing figure at six-feet tall.

Two years later, Vessey moved to Wessington Springs due to his wife’s failing health and he joined the mercantile firm of Vessey Brothers, Ransom and Company. They later changed the name to Albert and Vessey. He continued his involvement in ranching while being a merchant, gradually moving from raising sheep to cattle and establishing the R.S. Vessey Cattle Company.

He and Florence raised four children: Harry, Vera, Bernice, and Robert, Jr. A successful businessman who valued free enterprise, Vessey was a founder of the South Dakota Retailers Association. He also served as President of Wessington Springs State Bank.

Vessey was elected to the State Senate in 1904 and served as President Pro Tempore of the body in 1907 and 1908. He was a close supporter of Gov. Coe Crawford, and when Crawford decided to forgo a second term as governor to run for the U.S. Senate, he swung Progressive Republican support for the governor’s chair to Vessey.

The new governor took his oath of office in the former state Capitol building called the sheep shed by Pierre residents. The large new Capitol building was under construction when Vessey took office in 1909. He continued to pursue a progressive platform. He pushed for increased railroad regulation and for higher taxes on railroads. He supported progressive morality laws including a prohibition of gambling and drinking on passenger trains, anti-profanity laws, and a ban on providing free liquor on Election Day.

Vessey was the first to occupy the governor’s office in the new state Capitol, moving into it in 1910. The impressive new Capitol structure was built at a cost of approximately $800,000.

Vessey also became the first governor in America to proclaim Mother’s Day, which he did by executive proclamation in 1909. He was the first governor to supervise the Department of Game, Fish and Parks, created by the legislature. The Chinese Ringneck Pheasant became a protected species under this new state agency.

After two terms as governor, Vessey declined to run for the U.S. Senate and returned to private business. He eventually left South Dakota, moving to southern California, where he continued in real estate, and died in Pasadena, California in 1929.

Vessey was honored in 2014 by the Trail of Governors with a life-size bronze statue by sculptors Lee Leuning and Sherri Treeby. The statue portrays Vessey as a shopkeeper, with his hands outstretched welcoming a customer. It was placed at the corner of Capitol Avenue and Nicollet Avenue, near the offices of the South Dakota Retailers Association, of which Vessey was a founder.