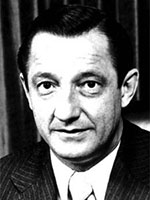 Richard Kneip’s family lived in Elkton at the time of his birth. The family moved to Arlington, where Kneip graduated from high school. Kneip served in the United States Air Force from 1951 to 1955, serving in occupied Germany. He married Nancy Pankey, an Illinois native, in 1958 and they settled in Salem. They had eight sons: Kevin, Kent, Keith, Kurt, Philip, Paul, Patrick, and Michael.

In Salem, Kneip owned and operated Kneip Sales, a milk equipment wholesaler. He ran for the State Senate in 1964 to win a bet that a Democrat could be elected from McCook County. During three terms in the Senate, Kneip was elected senate minority leader and served on the Constitutional Revision Commission.

Kneip sought the governor’s office in 1970, drawing attention to his candidacy with the memorable question, “What is a Kneip?” He defeated Governor Farrar, becoming the state’s youngest governor at age 37, and the first Roman Catholic to hold the office.

Governor Kneip left a lasting mark on South Dakota through his far-reaching proposals to modernize state government. Having served on the Constitutional Revision Commission as a legislator, he advocated for many of the commission’s proposals. With Kneip’s support, voters approved a new executive article extending the gubernatorial term from two to four years and provided for the governor and lieutenant governor to be elected as a ticket. The amendment reorganized 160 boards, commissions, and agencies into 16 cabinet departments. Another amendment created the Unified Judicial System. Kneip created the State Retirement System, the State Investment Council, and the Bureau of Finance and Management, and passed a new Career Service Act for state employees.

The constitutional change allowed Kneip to become the only governor to be elected to three consecutive terms with two-year terms in 1970 and 1972, and a four-year term in 1974.

Like his Democratic predecessor Ralph Herseth, Kneip sought tax reform. He secured a broadening of the sales tax, tax relief for the elderly and disabled, and a personal property tax phase out. Another proposal to create a state income tax fell just short of being adopted by the legislature.

Kneip resigned shortly before his term ended, in 1978, to accept an appointment from President Jimmy Carter as U.S. Ambassador to Singapore. He returned to South Dakota in 1980, where he worked as president and general manager of Nelson Laboratories. Kneip sought a return to the governor’s mansion in 1986, narrowly losing the Democratic primary. He died the following year, on March 9, 1987, and was interred at St. Michael’s Cemetery in Sioux Falls. The Richard F. Kneip Building in Pierre is named in his honor, and U.S. Highway 14 from Brookings to Elkton is designated the “Richard F. Kneip Memorial Highway.”

Kneip was honored in 2015 by the Trail of Governors with a life-size bronze statue by sculptors Lee Leuning and Sherri Treeby. The statue, placed in Pierre on Broadway Avenue near the Capitol Lake peninsula, portrays a genial Kneip with his shirtsleeves rolled up, his necktie loosened, and his hand outstretched in welcome.