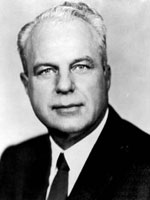 The son of Norwegian immigrants, Ralph Herseth was born on his family’s farm near Houghton in 1909. He graduated from Columbia High School in 1928. After taking courses at North Dakota State University and Northern State College, he returned to Houghton to help operate the farm. In 1937, Herseth married Lorna Buntrock, who had grown up on a farm near the Herseths. The Herseths had three children: Karen, Connie, and Ralph Lars.

Herseth operated his farming operation for his entire life. During the Great Depression, he was superintendent for the Civilian Conservation Corps in South Dakota. In 1941, he began to operate a farm equipment store and a Gamble farm store in Hecla.

Herseth was elected to the State Senate in 1950 and in 1954. In 1955, he became the first Senate Minority Leader. In 1956, Herseth challenged Governor Foss’ reelection campaign, capitalizing on public dissatisfaction with state changes to the property tax system that had led to high property valuation assessments. Herseth did not defeat Governor Foss, but when Foss left office two years later, Herseth successfully sought the open seat, winning the office in 1958.

In 1960, Herseth sought reelection, but was narrowly upset by Republican House Speaker Archie Gubbrud. Two years later, Herseth ran for governor one final time, unsuccessfully challenging Governor Gubbrud’s reelection. He is the only South Dakotan to be nominated for governor in four consecutive elections.

Herseth suffered a heart attack and died in 1969 at the age of 59. After Herseth’s death, his widow, Lorna, served as South Dakota Secretary of State from 1973 to 1979. Herseth’s son, Lars, followed him to the State Legislature and was the Democratic nominee for governor in 1986, losing narrowly to George S. Mickelson, another son of a former governor. Herseth’s granddaughter, Stephanie Herseth Sandlin, was elected to the U.S. House of Representatives in 2004, serving until 2011 and making her the first woman to represent South Dakota in the U.S. House. She became the president of Augustana University in 2017.

Herseth was honored by the Trail of Governors in 2018 with a life-size bronze statue by sculptor James Michael Maher.  The statue, which portrays Herseth in his farm work clothes, is placed near the State Capitol grounds at the intersection of Broadway Avenue and South Dakota Boulevard.