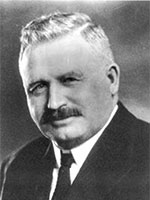 Peter Norbeck, South Dakota’s first native-born governor, was the son of Scandinavian immigrants. He was born in a dugout at his parent’s homestead. Norbeck’s father, a Lutheran lay pastor, moved the family to Charles Mix County in 1885. Here Norbeck met Lydia Anderson, whose family attended Norbeck’s church. The couple married in 1900 and had four children: Nellie, Ruth, Harold and Selma.

Norbeck attended the University of South Dakota for three terms. In 1892, his father bought him a well-digging machine, which Norbeck improved allowing him to dig wells inexpensively. He moved to Redfield and founded the Artesian Well Company, becoming the largest well-drilling business in five states, drilling more than 12,000 wells.

Norbeck entered politics in 1908 when elected to the State Senate. In three terms, he sponsored progressive reform legislation, and in 1914, was elected lieutenant governor.

Norbeck was elected governor in 1916, and led an activist Progressive Republican administration. He promoted state-owned enterprises including the State Cement Plant, state hail insurance, and a hydroelectric commission. He supported the women’s suffrage movement and the prohibition of alcohol. Norbeck led the state during World War I, leading efforts to sell war bonds, aid draft boards, and conserve food and fuel.

The governor called President Theodore Roosevelt his “idol and ideal,” and like Roosevelt, he vigorously promoted conservation efforts. As governor, Norbeck founded Custer State Park, the state’s first state park. He named himself chairman of the state park board and personally oversaw the development. Norbeck also initiated an aggressive program of highway construction, naming himself chairman of the State Highway Commission.

An avid sportsman, Norbeck held the state’s first hunting season for the Chinese Ringneck Pheasant, and authorized a state purchase and release program to boost the pheasant population.

After two successful terms as governor, Norbeck was elected to the United States Senate in 1920. During his 16 years in the Senate, he wrote the Migratory Waterfowl Act and pushed for the creation of Grand Teton National Park in Wyoming.

Norbeck continued to promote South Dakota as a U.S. Senator. He brought Gutzom Borglum to South Dakota to carve Mount Rushmore, and insisted that his hero, Theodore Roosevelt, be included on the memorial. In addition to Mount Rushmore, Norbeck aided in the development of Iron Mountain Road, Sylvan Lake, the Needles Highway, Wind Cave National Park, and Badlands National Monument. He also promoted the Black Hills in 1927, when he convinced President Calvin Coolidge to make the State Game Lodge his summer White House.

Norbeck was honored in 2014 by the Trail of Governors with a life-size bronze statue by sculptor James Michael Maher, placed at the intersection of Pierre Street and Dakota Avenue in downtown Pierre. The statue portrays Norbeck as a surveyor, standing on a base that evokes Custer State Park and pigtail bridges and that bears the inscription “Peter Norbeck: Poet of the Park.”