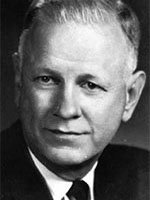 Governor Nils Boe was the twenty-third governor of South Dakota, serving from 1965 to 1969.

Boe was born on September 10, 1913 in Baltic. The son of a Norwegian Lutheran minister, he came to Sioux Falls as a child and graduated from Washington High School. Boe earned his bachelor’s and law degrees from the University of Wisconsin.

Boe returned to Sioux Falls in 1937 to practice law, serving as deputy state’s attorney for Minnehaha County. During World War II, he served in the United States Navy, leaving service in 1946 as a lieutenant senior grade.

Boe was elected to the State House of Representatives in 1950, and served from 1951-59. He served for four years as Speaker of the House.

In 1962, Boe sought the Republican nomination for U.S. Senate after the death of Senator Francis Case. He withdrew in favor of Lt. Governor Joe Bottum, and one week later was nominated to replace Bottum as lieutenant governor.

Boe sought the Governor’s Office in 1964. He narrowly defeated former governor Sigurd Anderson in the Republican Primary, and defeated former lieutenant governor John Lindley in the fall election. He was reelected in 1966. Never married, Boe was the state’s only bachelor governor; his sister Borghild was his primary hostess.

In his two terms, Governor Boe prioritized education by supporting the creation of four technical institutes, the establishment of S.D. Public Broadcasting, and the reorganization of rural school districts. He also emphasized efficient management and modernization in state government, moving to annual budgeting, adoption of the Uniform Commercial Code, and many government efficiency measures.

Boe was honored in 2016 by the Trail of Governors with a life-size bronze statue by sculptor James Michael Maher. The statue, placed at the intersection of Pierre Street and Dakota Avenue in downtown Pierre, portrays Boe out for a walk with his dog, “Beagle Boe.”