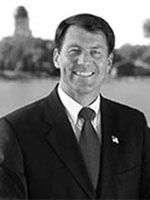 Rounds was born on October 24, 1954 in Huron, South Dakota. As a child, he moved with his family to Pierre, where his father Don served as director of highway safety during the administration of Governor Joe Foss. Although Mike was the oldest son, the family grew to include one daughter and nine more boys.

Rounds graduated from high school in 1973 and enrolled at South Dakota State University. Rounds graduated from SDSU in 1977, making him the first Jackrabbit alum to serve as governor. While at SDSU, he met Jean Vedvei, a Lake Preston native, and the couple married in 1978. They have four children: Christopher, Brian, Carrie and John.

After college, Rounds returned to Pierre, where he joined an insurance and real estate business that is today known as Fischer, Rounds & Associates. That company eventually grew from Pierre to have offices in five South Dakota towns. Rounds also become involved in politics, working on campaigns for Senator Jim Abdnor. He was elected to the State Senate in 1990, serving for ten years, and was senate majority leader for six years.

In late 2001, Rounds launched an underdog campaign for governor against two better-known and better-funded Republican opponents. When the campaign between the front-runners became very negative, Rounds benefited from his low-key, positive campaign. He handily won the nomination in one of the state’s great political upsets, and was elected governor in November. Rounds was also easily reelected in 2006.

Governor Rounds launched a “2010 Initiative” to focus on economic development and tourism promotion efforts. He aggressively led state efforts to convert the abandoned Homestake Gold Mine in Lead into a national laboratory for basic physics and underground science.

Governor Rounds supported the state universities during a period of prosperity and record enrollments, as the Board of Regents significantly increased university research and Ph.D. programs, built new “university center” satellite campuses in Sioux Falls and Rapid City, and allowed SDSU and USD to move up to Division I athletics. Rounds also supported new and expanded scholarship programs, including the South Dakota Opportunities Scholarship and the DakotaCorps scholarship.

In response to deteriorating conditions in the Governor’s Mansion, Governor Rounds led efforts to build a new residence on the same site with private donations.

After leaving office in 2011, Rounds returned to business in Pierre. In 2014, he was elected to the United States Senate, becoming the first South Dakota governor to enter the Senate since Harlan J. Bushfield, and he was reelected in 2020.  In 2021, the Sanford Underground Research Facility recognized Rounds for his contributions to the lab, naming the lab’s M. Michael Rounds Operations Center in his honor.

Rounds was honored in 2016 by the Trail of Governors with a life-size bronze statue by sculptor James Michael Maher, portraying Rounds in hunting gear with a shotgun and his hunting dog, “Baby.” The sculpture was placed on the Governor’s Mansion grounds near the intersection of Capitol Avenue and Washington Avenue. The site adjoins brick landscaping that honors donors to the new mansion’s construction, and is near the neighborhood in Pierre where Rounds grew up.