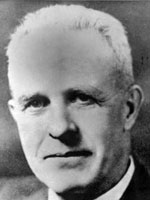 Merrell Q. Sharpe was born in Marysville, Kansas in 1888 and attended school in Axtel, Kansas. Sharpe worked as a surveyor’s assistant, a rural schoolteacher, and a newspaper reporter, before enlisting in the U.S. Navy in 1907. After leaving the Navy in 1911, Sharpe came to South Dakota, where he enrolled at the University of South Dakota and earned his law degree in 1914.

Following his graduation, Sharpe established a legal practice in Kennebec and Oacoma. He eventually built a lucrative practice, attracting clients from throughout the state, and he became known as a “lawyer’s lawyer” who aided young lawyers in entering the practice of law. Sharpe also served as Lyman County State’s Attorney. In 1918, he married Emily Auld, a native of Plankinton. They had one daughter, Lorna.

Sharpe was elected attorney general in 1928. He launched an in-depth investigation of the state banking department, discovering that the banking superintendent had embezzled $1.2 million in funds from failed banks. Sharpe also investigated the failed Rural Credits program, writing a “scathing denouncement” of the Norbeck and McMaster administrations for mishandling of funds. Sharpe lost reelection in 1932 amidst the FDR Democratic landslide. In 1937, Sharpe chaired the Supreme Court Statute Codification Commission, which led to the first codification of South Dakota state laws in 1939.

In 1942, Sharpe sought the Republican nomination for governor as an outsider against a trio of officials who had served in the Bushfield administration. Sharpe finished second in the Republican primary, but because no candidate won 35% of the vote, the nomination was made by the State Republican Convention, where Sharpe prevailed after the “statehouse trio” failed to unite behind a single candidate.

Governor Sharpe had served as Governor Bushfield’s delegate to the Missouri River States Committee, and as governor himself he chaired the committee. In that role, he played a leading role in negotiating the Pick-Sloan Plan, which led to the authorization of the Missouri River dams. Governor Sharpe also led civil defense and rationing efforts during World War II and created a state veterans department. After the war ended, he initiated an aggressive post-war building and development plan, founding the state park system, building a state office building, revitalizing the teacher pension fund, and creating the state police radio system. Sharpe also supported repeal of the state income tax.

In 1946, Sharpe sought an unprecedented third term as governor, but lost in the Republican primary to Attorney General George T. Mickelson. He returned to his Lyman County practice, and chaired Governor Herseth’s citizen tax study commission in 1959. Sharpe died of a heart attack at his home in Kennebec in 1962. Today, the capital city of Pierre is on the shores of Lake Sharpe, which was created by the Big Bend Dam and named in Governor Sharpe’s honor.

Sharpe was honored by the Trail of Governors in 2018.  The life-size bronze statue by sculptors Lee Leuning and Sherri Treeby pays tribute to Sharpe’s role in developing the Missouri River dams and portrays Sharpe in fishing gear, holding a Northern Pike.  It is placed near Lake Sharpe, in front of the American Legion Post 8 “cabin” at the end of Pierre Street on Island View Drive.