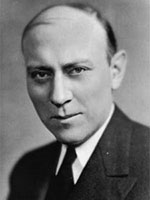 Governor Leslie Jensen was born in Hot Springs in 1892. His father, Christian, was a Danish immigrant who operated a stagecoach from Rapid City and later owned the People’s Telephone and Telegraph Company in Hot Springs.

Jensen attended school in Hot Springs and went to Culver Military Academy in Culver, Indiana. He joined the South Dakota National Guard and was deployed to the Texas-Mexico border in 1916 and then to France during World War I. Following the War, Jensen enrolled at the University of South Dakota, where he earned his law degree in 1921.

Following law school, Jensen became the federal collector of internal revenue for South Dakota, living in Aberdeen from 1922 to 1934. While in Aberdeen, he married Elizabeth Ward, whose father build the landmark Alonzo Ward Hotel. The Jensens had three children: Leslie, Natalie and Karen.

Jensen returned to Hot Springs, where he operated his family’s telephone business. The Jensen family also built and operated the Blue Bell Lodge in Custer State Park, which Jensen sold to the state in 1935.

In 1936, with no prior elected experience, Jensen ran for governor. He won an upset victory over incumbent Governor Tom Berry, who was seeking an unprecedented third term.

As a businessman, Governor Jensen strengthened state finances through increased taxes, cuts in state spending, and a reduction in state-held debt. As the only governor from the Black Hills, he emphasized tourism promotion. Governor Jensen also promoted highway construction and founded the precursor to the South Dakota Highway Patrol.

In 1938, Governor Jensen declined a second term and instead ran for U.S. Senate, but narrowly lost the Republican primary. In 1940, as American involvement in World War II loomed, Jensen’s National Guard unit was activated, with Jensen commanding the unit. He deployed to Australia, where he contracted malaria, and was reassigned to General Douglas MacArthur’s Australian headquarters.

After the War, Jensen returned to Hot Springs and resumed his business. He died in 1964, after he sustained injuries in a car accident on Highway 79, and was interred in Hot Springs.

Jensen was honored in 2017 by the Trail of Governors with a life-size bronze statue by sculptor James Van Nuys. Jensen is prepared for battle during the First World War. The statue is placed on Capitol Avenue near the Soldiers and Sailors World War Memorial building, recognizing Jensen as the only governor to have served in the First World War. He also served during the Second World War.