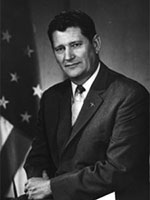 Governor Joseph J. Foss was born in 1915 and grew up on his family’s farm east of Sioux Falls. Foss discovered a fascination with flight after he saw Charles Lindbergh and his airplane, The Spirit of St. Louis, in Sioux Falls in 1927. Foss flew himself for the first time in 1934, when he went on an airplane ride with Spearfish aviator Clyde Ice.

Foss’ father was electrocuted and died when he stepped out of his pickup onto a downed power line during an electrical storm. Foss, a senior in high school, left school to run his family farm and work at a meat packing plant. He returned to Sioux Falls Washington High School and graduated once his younger brother could operate the family farm. In 1940, he graduated from the University of South Dakota.

A member of the South Dakota National Guard since 1937, Foss enlisted in the U.S. Marine Corps in 1940 and became a naval aviator. Foss downed 26 enemy planes in 63 days at Guadalcanal in the Pacific theater during the World War II, earning the Congressional Medal of Honor and the Distinguished Flying Cross. A photo of Foss receiving his Medal of Honor from President Franklin D. Roosevelt was featured on the cover of Life magazine.

In 1942, Foss married June Shakstad, and the couple had five children, three of whom lived to adulthood: Cheryl, Mary Joe, and Frank. Two other children, Joe Jr. and Eric, died in infancy.

Returning to Sioux Falls in 1946, Foss founded the South Dakota Air National Guard, attaining the rank of brigadier general. He operated a charter flying service and a Packard automobile dealership. During the Korean War, Foss returned to active duty in the U.S. Air Force, training pilots.

After leaving office in 1959, Foss served from 1959 to 1966 as commissioner of the American Football League, leaving shortly before the league merged with the older National Football League. He hosted outdoor television programs, and served as international chairman of Campus Crusade for Christ and President of the National Rifle Association. In 1967, Foss married Donna “Didi” Hall.

Foss retired to Scottsdale, Arizona, where he died on January 1, 2003. He was interred at Arlington National Cemetery.

Foss was honored in 2017 by the Trail of Governors with a life-size bronze statue by sculptors Lee Leuning and Sherri Treeby placed on Capitol Avenue near the Joe Foss Building. Foss is dressed ready for flight looking into the sky for returning planes.