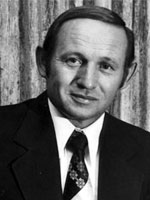 Governor Harvey Wollman was the twenty-sixth governor of South Dakota, serving from 1978 to 1979. Wollman was born on March 14, 1935 in Frankfort, South Dakota and grew up on his family’s farm in Spink County. Wollman graduated from Doland High School in 1953. He married Anne Geigel in 1958, and they had three children: Kristine, Michael and Daniel.

Wollman attended Bethel College in St. Paul, Minnesota, and then served in the U.S. Army from 1958 to 1960. After leaving the Army, he completed his degree at Huron College in 1961.

After college, Wollman returned to his family farm. He was elected to the State Senate, serving from 1969 to 1975. He became a legislative leader, serving the Democratic caucus as both minority leader and majority leader.

In the legislature, Wollman was a sponsor of several major pieces of legislation, including the creation of the State Investment Council, the founding of the Housing Development Authority, and the establishment of the four-year, degree-granting School of Medicine at the University of South Dakota.

In 1974, Governor Richard Kneip invited Wollman to join him on the Democratic ticket as the candidate for lieutenant governor. The Kneip-Wollman team was elected, and Wollman took office in 1975.

Governor Kneip resigned in 1978 to become the U.S. Ambassador to Singapore. Wollman became the first lieutenant governor to succeed to the governorship, taking office on July 24, 1978. He was sworn in as governor by his brother, Chief Justice Roger Wollman.

Although Governor Wollman only served in office for five months, he was not a caretaker. As governor, he focused on water project development, proposed a plan to accelerate the elimination of the personal property tax, and highlighted the threat that railroad abandonment posed to the agricultural industry.

Governor Wollman left office in 1979. He and his wife continue to reside on their farm in Spink County.

Wollman was honored in 2013 by the Trail of Governors with a life-size bronze statue by sculptor John Lopez. The statue, placed at the intersection of Pierre Street and Dakota Avenue in downtown Pierre, portrays Wollman delivering a speech.