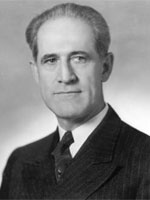 Governor Harlan J. Bushfield was the 16th governor of South Dakota, serving from 1939 to 1943. He was born in Atlantic, Iowa in 1882, and the next year moved to Dakota Territory with his family. He attended public school in Miller and Dakota Wesleyan University, and graduated from the University of Minnesota with a degree in law. Bushfield was admitted to the bar and returned to practice law in Miller. He was elected States Attorney for Hand County in 1906. He married Vera Cahalan in 1912 and they had three children, Mary, John and Harlan Jr.

Bushfield served on the local school board and Selective Service Board during World War I. He served as Hand County States Attorney, and later became chairman for the Republican State Committee. When Governor Leslie Jensen decided to leave the governorship after only one term to run for the U.S. Senate, Bushfield stepped in and ran for governor. He was elected in 1938 and reelected in 1940.

Governor Bushfield was one of South Dakota’s most fiscally conservative leaders. He was an ardent admirer of Abraham Lincoln and Thomas Jefferson, and especially admired Jefferson’s commitment to fiscal responsibility. Bushfield consolidated state departments, cut 300 state jobs, and cut spending by 26 percent. He cut the state sales tax, eliminated the state property tax, and advocated for the repeal of the state income tax. Bushfield also accelerated the liquidation of the Rural Credit program, a failed state-funded farm loan program that had been created in the 1910s and cost the state millions of dollars over forty years.

After two terms as governor, Bushfield was elected to the U.S. Senate in 1942. He continued to advocate for cuts in government spending, but supported farm relief programs and the war effort during World War II.

Bushfield suffered a stroke in 1947 and decided not to run for another term in the Senate. He died in Miller in 1948, a few months before his term in the Senate ended. Governor George T. Mickelson appointed Bushfield’s wife, Vera, to serve the remainder of his term, and she joined Gladys Pyle as one of only two women to represent South Dakota in the U.S. Senate.

Bushfield was honored in 2012 by the Trail of Governors with a life-size bronze statue by sculptor James Michael Maher. The statue, placed at the corner of Pierre Street and Sioux Avenue in downtown Pierre, features a small bust of Thomas Jefferson and papers that quote Bushfield’s speeches and writings.