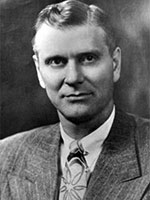 George T. Mickelson was the first governor born in the 20th century. He was named for his father, George M. Mickelson, a Norwegian immigrant who homesteaded in Walworth County. Orphaned at age 15, Mickelson lived with older siblings until his graduation from Selby High School in 1921. At the urging of his teachers, Mickelson enrolled at the University of South Dakota, where he served as student body president and graduated with a law degree in 1927.

While at USD, Mickelson married Madge Ellen Turner, an Iowa native who came to South Dakota with her family in 1909. Mrs. Mickelson had been an outstanding athlete at Northern State, where she won the 1923 national collegiate championship for javelin. The Mickelsons had four children: Janice, Lavon, Patricia, and George Speaker, who himself was elected governor in 1986.

Mickelson opened a law practice in Selby in 1927, where he served as city attorney, as Walworth County state’s attorney, and on the Selby school board. He was elected to the State House of Representatives in 1936, and during three terms chaired the appropriations committee and was elected speaker of the house. He was elected attorney general in 1942.

In 1946, Mickelson challenged Governor M. Q. Sharpe, who was seeking a third term. He defeated Sharpe in the Republican primary and overwhelmingly won in the general election. Mickelson served as governor during a time of post-war prosperity amidst a strong agricultural economy. He initiated a massive highway construction program, replacing gravel roads with paved surfaces. Mickelson also spent heavily on higher education, expanding universities to accommodate an influx of GI Bill-era students. He continued Governor Sharpe’s support for the Pick-Sloan Plan for Missouri River dam construction. Mickelson initiated a plan to retire the state’s Rural Credit debt, passed legislation to strengthen “right to work” laws, and proposed a temporary tax to finance bonuses for World War II veterans.

Mickelson left office in 1951, having declined a candidacy for U.S. Senate. He chaired the Eisenhower for President campaign in South Dakota in 1952. The following year, Mickelson was appointed federal district judge. Judge Mickelson made landmark rulings on the property rights of Native Americans, holding that tribal lands were not subject to condemnation absent a settlement with the tribes.

Mickelson was honored by the Trail of Governors in 2015. The life-size bronze statue of Mickelson by sculptor James Michael Maher was placed on the State Capitol grounds near the intersection of Nicollet Avenue and Prospect Avenue. It portrays Mickelson striding forward, dressed in a double-breasted suit and holding a hat in his hand, out for a brisk walk around the Capitol grounds.