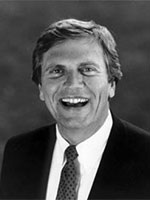 George S. Mickelson spent his early years in Selby. He was born during the 1941 legislative session when his father, George T. Mickelson, served as speaker of the House of Representatives. The elder Mickelson intended to have his son share his middle name, Theodore, but at the urging of fellow representatives, the baby was instead named George Speaker, recognizing his father’s position.

The elder Mickelson went on to serve as attorney general, governor and federal district judge. The family moved to Sioux Falls, where George S. attended Washington High School. A fellow WHS student was Linda McCahren who Mickelson married in 1963. The Mickelsons had three children: Mark, Amy and David.

Mickelson graduated from the University of South Dakota in business administration in 1963, and earned his law degree from USD in 1965. He joined the U.S. Army, serving in Vietnam, and was discharged as a captain in 1967.

After working as an assistant attorney general, Mickelson moved to Brookings and joined a private law practice. He served as Brookings County state’s attorney, and was elected to the House of Representatives in 1974. Like his father, he served as speaker of the House.

Mickelson was elected governor in 1986, making the Mickelsons the only father-son duo to serve as South Dakota governor. His opponent, Democrat Lars Herseth, was also the son of a former governor.

The new governor promoted economic development efforts, creating the REDI revolving loan fund and the Future Fund. Mickelson created the Department of Tourism, launched the “Great Faces, Great Places” promotion campaign, and initiated the conversion of an old Black Hills railroad into the bicycle trail that now bears his name. He implemented the state lottery and Deadwood gaming after the voters’ approval in 1986.

Mickelson led the state’s “Celebrate the Century” centennial celebrations in 1986, including the opening of the new Cultural Heritage Center, and led the founding of the South Dakota Community Foundation.

Recognizing the need for improved racial relations, Mickelson declared 1990 as the “Year of Reconciliation,” and is remembered for his outreach to South Dakota’s Native Americans.

Governor Mickelson died with seven others on April 19, 1993, when a state plane crashed near Dubuque, Iowa. The eight men were returning from Cincinnati, Ohio, where they had met with the owners of the John Morrell and Co. packing plant in Sioux Falls.

The first South Dakota governor to die in office, Mickelson was the first to lie in state at the South Dakota State Capitol. The state commissioned the Fighting Stallions memorial on the Capitol grounds in memory of him and the other plane crash victims. The granite base of the memorial includes the following inscription in memory of Mickelson: South Dakota was just a century old when a new leader emerged. Eyes sparkling with vision, he embraced life. His smile created instant friendship, his devotion to family inspired. With limitless energy and genuine compassion, he challenged us to realize bigger dreams. George Mickelson made a difference.

Mickelson was honored in 2014 by the Trail of Governors with a life- size bronze statue by sculptor James Michael Maher. The statue portrays a smiling Mickelson with his suit jacket slung over his shoulder and his hand extended in greeting. It is placed on Capitol Avenue, near the Fighting Stallions Memorial that was erected in honor of Mickelson and the other victims of the state plane crash.