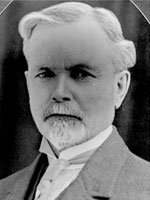 Frank M. Byrne was the son of Irish immigrants and was born in a log cabin on his family’s farm in Allamakee County, Iowa. His only formal education was at a nearby rural school, where his teacher was Coe I. Crawford, another future South Dakota governor.

Byrne was attracted by the “Dakota Boom” to Sioux Falls in 1879, where he worked for homesteaders and then filed a claim in McCook County. In 1883, he moved to Faulk County, where he entered the insurance business and established a large farm. He later sold his farm and founded a successful land company. In 1888, Byrne married Emilie Beaver in Watertown, and the couple had five children who survived infancy: Carroll, Francis, Malcom, Joseph, and Emmons.

Byrne was elected to the first State Senate in 1889. He served as Faulk County treasurer, and then returned to the State Senate in 1907, where he served as appropriations chairman and president pro tempore. As a progressive, Crawford joined with Senator Robert S. Vessey to sponsor Governor Crawford’s progressive agenda. In 1910, Byrne was elected lieutenant governor, and in 1912 he won a close contest to become South Dakota’s 8th governor.

Governor Byrne advocated for a state bank deposit guaranty law and for the creation of state agencies to regulate railroads, banking, and insurance. He created the State Highway Commission and oversaw the first planning and construction of the state highway system. Governor Byrne reformed the prison system and abolished capital punishment. He also authorized Custer State Forest to establish the state buffalo herd, with a purchase of 36 American bison from Scotty Philip in 1914.

Byrne was reelected governor in 1916. In 1918, he mounted an unsuccessful primary challenge to incumbent U.S. Senator Thomas J. Sterling. From 1921 to 1925, he served as the first commissioner of the newly-created state Department of Agriculture in the administration of Governor William H. McMaster. Following his retirement, Byrne moved to California for health reasons, where he died in San Francisco on Christmas Eve, 1927.

Byrne was honored by the Trail of Governors in 2022.  The life-size bronze statue by sculptor James Michael Maher is placed on Broadway Avenue near the Becker-Hansen Building, the South Dakota Department of Transportation’s main office, in recognition of Byrne’s role in the development of the state highway system. It portrays Byrne, who was largely self-educated, reading from a passage from the meditations of Marcus Auerelius: “Everything lasts for a day; the one who remembers and the remembered.”