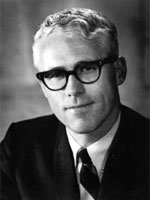 Governor Frank Farrar was the twenty-fourth governor of South Dakota, serving from 1969 to 1971. Farrar was born on April 2, 1929, the son of third-generation homesteaders in Marshall County. He entered the Boy Scout program in Britton, S.D., becoming an Eagle Scout and later in life, a Distinguished Eagle Scout. He graduated from high school in 1947 with a serious lifetime football injury and as senior class president. Farrar was the only person elected governor at South Dakota Boys State, and later also elected governor of the state of South Dakota. He attended the University of South Dakota at Vermillion, S.D., graduating with a business degree and a law degree. He served as president of his fraternity, the inter-fraternity counsel, and USD’s student body.

He joined the South Dakota ROTC while at USD, which helped finance his education. He was commissioned as a lieutenant and served in the Korean War. He continued serving as a captain in the U.S. Army Reserves for 15 years. In 1953, he married Patricia Henley from Claremont, S.D. The Farrars had five children: Jeanne, Sally, Mary, Anne, and Robert, and all graduated from USD.

After leaving the Army, Farrar became an estate and gift tax examiner for two years. He returned to open a law practice in Britton. There he learned to fly a crop sprayer and became a pilot with 19,000 hours. He served as Marshall County judge and as Marshall County state’s attorney. He was elected president of the South Dakota State’s Attorneys Association. In 1962, at the age of 33, Farrar was elected and served as the youngest South Dakota attorney general for three two-year terms. He focused on enforcing insurance, banking and securities laws, and reducing drug-related crime.

Farrar was elected governor in 1968 at the age of 39. As governor, he focused on consumer protection and modernizing the state’s banking and insurance statutes. He garnered more state aid for education and assisted in utilizing advanced teaching methods and higher efficiency. Governor Farrar signed a Narcotics Drug Act to crack down on drug users and dealers. He highlighted the importance of economic development, recruiting businesses locally as well as from other states.

Governor Farrar was defeated for reelection in 1970. He then returned to law, farming and banking. He served on the advisory board for Wells Fargo and Citi Bank. Despite physical handicaps, Farrar participated in triathlons, Ironman competitions and the Senior Olympics, statewide and nationally, into his eighties.

Farrar was honored in 2013 by the “Trail of Governors” with a life-size bronze statue by sculptor James Michael Maher. The statue, placed in front of Farrar’s First National Bank on Sioux Avenue, portrays Farrar running, evoking his reputation for physical fitness.