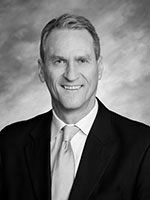 Governor Dennis Daugaard served as the thirty-second Governor of South Dakota from 2011-19.

Daugaard was born on June 11, 1953.  He grew up between Dell Rapids and Garretson on his family’s farm, which his grandparents purchased in 1911 after they emigrated from Denmark.  Daugaard’s parents, Raymond and Florence, were both born deaf, making sign language the principal means of communication for his family.

Daugaard attended a one-room country school and graduated from Dell Rapids High School in 1971.  He worked his way through USD – washing dishes, welding, and painting water towers – and graduated in 1975 with a B.S. in government.  Daugaard then earned his law degree in 1978 from Northwestern University in Chicago, and worked in Chicago for three years.

Daugaard moved back to South Dakota in 1981 to marry his high school girlfriend, Linda Schmidt. Two years later, they purchased the Daugaard family farmsite where, over the next year, they built their own home. Their children Laura, Sara, and Chris were the fourth generation of Daugaards to live on the family farm.

After working for nine years in banking, Daugaard in 1990 joined Children’s Home Society of South Dakota, first working for eleven years as development director for the foundation, and then for seven years as executive director.  Daugaard became involved in politics in 1996 when he was elected to the first of three terms in the State Senate.  He was elected lieutenant governor in 2002, serving for eight years with Governor Mike Rounds.

Daugaard ran for governor in 2010, winning a five-way Republican primary with more than fifty percent of the vote, and winning the general election that fall on a ticket with former House Speaker Matt Michels of Yankton.  In 2014, the Daugaard/Michels ticket was reelected by the largest margin in state history.

As Governor, Daugaard prioritized sound stewardship of the state’s resources, including increased funding for highway construction, prudent management of the state pension plan, and maintenance and preservation of state buildings. Under his leadership, South Dakota was named “Best Run State in America” and obtained the highest bond rating of AAA from all three rating agencies.

In 2016, Daugaard signed legislation asserting the state’s ability to tax remote, online sellers.  This led to a favorable ruling from the United States Supreme Court, ending a twenty-year effort by states to achieve sales tax fairness.

Daugaard left office in early 2019, retiring to his home near Dell Rapids.

Daugaard was honored in 2019 by the Trail of Governors with a life-size bronze statue by sculptor James Michael Maher.  Daugaard’s hand is outstretched, making the American Sign Language sign for “I love you.”  In his other hand, Daugaard holds a shovel, evoking his enthusiasm for tree-planting and his commitment to maintenance and repair.  That hand is also pinching a penny, a reference to his well-known frugality.  The sculpture was placed north of the Governor’s Mansion on Governor’s Drive, near the eastern shore of Capitol Lake.