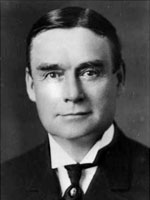 Coe I. Crawford was born on his family’s farm near Volney, Iowa in 1858. After attending school, he became a teacher, and among his students was another future South Dakota governor, Frank M. Byrne. After earning his law degree from the University of Iowa, Crawford came to Pierre, Dakota Territory, where he started a law practice in 1883. The following year, he married May Robinson and they had two children, Miriam and Irving. May died in 1894, and her sister, Lavinia, moved to Pierre to care for the Crawford children. Crawford married Lavinia in 1896, and they had three more children: Robert, Oliver and Jeanette.

In Pierre, Crawford represented the Chicago and North Western Railroad and served as Hughes County states’ attorney. He served on the final territorial council, and was a member of the first State Senate, where he drafted the state’s original taxation statutes, as well as statutes creating the Board of Charities and Corrections.

In 1892, Crawford was elected attorney general, and he led the effort to locate State Treasurer W. W. Taylor after Taylor stole the state treasury and escaped to Latin America. In 1896, Crawford ran for U.S. House, but lost in the Populist sweep that year. The following year, he moved to Huron to become general counsel for the Chicago and North Western Railroad.

Following the death of U.S. Senator James H. Kyle in 1901, Crawford hoped to be appointed to replace him. When the appointment instead went to conservative Republican “boss” Alfred B. Kittredge, Crawford aligned himself with the emerging progressive movement, ultimately resigning from his position with the railroad. After losing the nomination for governor to Samuel H. Elrod in 1904, Crawford defeated Elrod in 1906 and became South Dakota’s first progressive Republican governor.

Governor Crawford passed a comprehensive package of progressive reforms, including the state’s first direct primary law, new regulations and higher taxation on railroads, regulation of food and drugs and of telephone service, free textbooks in private schools, the prohibition of baseball and theatrical performances on Sundays, and a ban on the sale of cigarettes to minors. He also ended South Dakota’s status as a divorce haven, requiring one year of residency for divorce.

After one term as governor, Crawford challenged Senator Kittredge in the first Republican primary for U.S. Senate, narrowly defeating him. In the Senate, Crawford remained a progressive, and he came to support Theodore Roosevelt’s “Bull Moose” candidacy against President William Howard Taft in 1912. This led to a challenge to Crawford in 1914 from Congressman Charles H. Burke of Pierre, a Taft ally, and Burke defeated Crawford in an upset.

Crawford returned to Huron, where he resumed his law practice, remained a popular platform speaker, and continued his service as a trustee of Huron College. He died in 1944 and was interred with in a family plot in Iowa City, Iowa.

Crawford was honored by the Trail of Governors in 2021.  The life-size bronze statue by sculptors Lee Leuning and Sherri Treeby was placed at the corner of Pierre Street and Capitol Avenue, near the headquarters of the South Dakota State Bar Association.  Crawford, known as a spirited orator and debater, is portrayed in an aggressive pose, ready to vigorously defend his position.