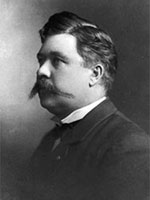 Charles Herreid was born in Wisconsin and grew up on his family’s farm near Madison, Wisconsin. After working for a year as a teacher, Herreid enrolled at the University of Wisconsin, graduating with a law degree in 1881. That same year, Herreid married Eunice Jeanette Sly, a fellow Wisconsin native. The Herreids had two children, Grace and Roscoe.

Herreid practiced law in Madison and served as clerk of the Wisconsin State Senate before leaving Wisconsin for Dakota Territory in 1884. He settled in Leola, where he assisted in the organization of McPherson County and fought to locate the county seat in Leola. Herreid practiced law, served as president of the Bank of Leola, and owned The Leola Blade newspaper.

Herreid served McPherson County in several capacities, including register of deeds, state’s attorney, and county judge. He moved from Leola to Eureka in 1893, and that same year became lieutenant governor. After a stint as state Republican chairman, Herreid was elected governor of South Dakota in 1900.

Governor Herreid served during a time of national prosperity and favorable, wet weather. Settlement of the state accelerated as railroads expanded into the state’s central and western regions. Herreid opposed government regulation of railroads, instead favoring voluntary efforts to lower rates. He traveled widely throughout the state to promote hunting and fishing, and advocated for the construction of gravel roads to replace unsurfaced dirt roads. Herreid encouraged and promoted the founding of the State Historical Society, and he signed legislation designating the American Pasque Flower as South Dakota’s state floral emblem. He was handily reelected in 1902.

Herreid left office in 1905 and moved to Aberdeen, where he was president of Citizens Trust and Savings Bank and vice president of the Dakota Central Telephone Company. After being rejected for military service in World War I due to age, Herreid served as the state’s food administrator, working under the leadership of National Food Administrator Herbert Hoover. An avid outdoorsman, Herreid also contributed articles to periodicals such as Field and Stream.

Governor Herreid died in Aberdeen on July 6, 1928 and was interred at Riverside Cemetery in Aberdeen. The city of Herreid, in Campbell County, was named in his honor.

Herreid was honored by the Trail of Governors in 2015. He is a confident manly man standing on the street corner watching the traffic go by. The life-size bronze statue by sculptor James Michael Maher was placed near the intersection of Pierre Street and Pleasant Drive.