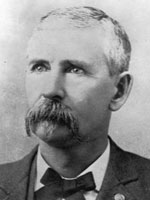 Charles H. Sheldon was born in Vermont in 1840. His father, a hatter who had come to Vermont from Montréal, died when Sheldon was four, and Sheldon worked as a farm laborer and a store clerk while receiving limited schooling. During the Civil War, Sheldon served in the Union Army.

Following the war, Sheldon moved to Illinois, where he married Mary Waters in 1868. Their two children died in infancy, and Mary died in 1874. The following year, Sheldon married Martha Frizzell in Grantsburg, Illinois. They had three children: James, Ethel and Charles Jr.

In 1881, the Sheldons came to Dakota Territory, eventually settling near Pierpont. Sheldon became a local Republican leader and a popular platform speaker, serving in the territorial legislature from 1887 to 1889. He was elected to be the South Dakota’s second governor in 1892.

Shortly after taking office, Governor Sheldon had to deal with the fiscal crisis caused by the theft of the state treasury by the outgoing state treasurer, W. W. Taylor, and Sheldon signed legislation to require periodic reporting on state funds. The Panic of 1893 struck shortly after Sheldon took office, leading to falling commodity prices and a weakened farm economy. Sheldon also signed legislation limiting South Dakota’s status as a “divorce haven,” lengthening the residency requirement from three to six months.

Sheldon retired to his farm after leaving office in 1897, but continued to be a popular platform speaker for Republican candidates. The year after he left office, in 1898, Sheldon died while on a speaking tour, succumbing to pneumonia at the Bullock Hotel in Deadwood. He was interred at Homer Cemetery in Pierpont.

Sheldon was honored by the Trail of Governors in 2021.  The life-size bronze statue by sculptor James Michael Maher, near Capitol Lake and across Capitol Avenue from the Civl War Memorial, portrays Sheldon holding his Union Army saber and cap. He also holds a war-era photograph of himself.