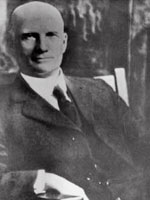 Carl Gunderson was born in a log cabin on his family’s homestead near Vermillion in 1864. Gunderson’s father served three stints in the territorial legislature and his uncle, Andrew E. Lee, was mayor of Vermillion and South Dakota’s third governor.

Gunderson obtained a degree in civil engineering and surveying from the University of South Dakota, making him the first USD graduate to be elected governor. In 1892, he married Gertrude Bertleson, a fellow Vermillion native. The Gundersons had four children: Helen, Florence, Carol and Norris.

Gunderson filed a homestead claim in Clay County and also operated a large wheat farm in Aurora County. He represented Clay County in the State Senate from 1893 to 1895 and from 1899 to 1903, and served as president pro tempore of the senate. From 1904 to 1911, Gunderson was a federal Indian allotting agent. In that role, he oversaw 10,000 Indian allotments and located town sites including Timber Lake, Eagle Butte, and Dupree, giving each its name.

A fiscal conservative, Governor Gunderson’s election brought to an end the state’s progressive era. After the state legislature overspent his recommended budget, he required state agencies to revert eight percent of appropriated funds. He repealed an insolvent state bank depositors guaranty law and ended the rural credits program after discovering embezzlement by the treasurer of its board. Although Governor Gunderson increased spending on higher education, he proposed the closure of the South Dakota School of Mines and of normal schools in Spearfish, Springfield and Madison to save money.

In 1926, Gunderson withstood a primary challenge from Secretary of State C. E. Coyne, but lost the general election to challenger W. J. Bulow, who became the state’s first Democratic governor. Many Norbeck loyalists and progressives supported the Democrat, and Gunderson’s loss was seen as a personal defeat as every other statewide Republican candidate was elected that year.

Gunderson twice sought to return as governor, losing the Republican nomination in both 1930 and 1932. He died of a heart attack in 1933 at his home in Mitchell, and was buried at Bluff View Cemetery in Vermillion, which was built upon Gunderson’s original homestead.

Gunderson was honored by the Trail of Governors in 2021.  The life-size bronze statue by sculptor Carl Gunderson was placed on the Governor’s Mansion grounds, near the corner of Washington Avenue and Cabot Street.  The sculpture portrays Gunderson, a lifelong wheat farmer, in work clothes, seated on a bale of hay.