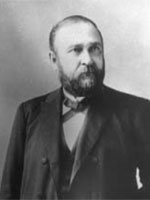 Governor Arthur C. Mellette was the first governor of the state of South Dakota, serving from 1889 – the year of our statehood – until 1893. He previously served as last governor of Dakota Territory.

Mellette was born on June 23, 1842 in Henry County, Indiana, and educated at Indiana’s Marion Academy. He enrolled at Indiana University, then enlisted as a soldier in Company H of the 9th Indiana Volunteers. He served as a substitute for his older brother who was unable to serve in the army due to his health. Mellette later graduated from Indiana University’s School of Law and moved to Muncie to practice law. There he married Margaret Wylie, and the Mellettes welcomed four sons: Theopholis, Charles, Arthur and Joshua. Mellette was elected to the Indiana state legislature, and purchased the Muncie Times newspaper. He was also elected county superintendent of schools.

Mellette searched the western states in later years when Margaret became ill, in quest of a better climate for her failing health. The family settled in Springfield in what was then Dakota Territory. There, Mellette served as registrar of the United States Land Office until it was moved north in the territory to Watertown. The Mellette family followed and began their life in Watertown by camping on the shores of Lake Kampeska.

In Watertown, Mellette soon became a prosperous attorney and a leading citizen. He was an early leader of the statehood movement, personally funding much of the effort, and was elected “Governor of Dakota” by a failed statehood organization in 1885.

Mellette was a personal friend of U.S. Senator Benjamin Harrison of Indiana and helped secure Harrison the Republican nomination for President in 1888. When Harrison was elected President, he appointed his friend Mellette to be the territorial governor of Dakota. Later that year, Harrison signed the proclamations that created South Dakota, and Mellette was overwhelmingly elected as the first governor.

The Mellette Administration was a difficult time for the new state. A severe drought threatened many farmers, and Governor Mellette appealed to eastern cities for charity. The battles between the U.S. Army and the Native American tribes continued during this time, as the Wounded Knee Massacre and the capture and killing of Sitting Bull occurred during his tenure.

Shortly after Governor Mellette left office in 1893, it was discovered that the state treasurer had stolen much of the state treasury and absconded to Mexico. Mellette, although not personally responsible, gave up his entire fortune and all of his property, except for his law library, to replace the stolen funds. Humiliated and impoverished, he left for Pittsburg, Kansas, where he opened a law practice. Three years later, Mellette died in Kansas at the age of 53. He had the shortest lifespan of any governor who died of natural causes. Mellette’s remains were returned to Watertown for burial. Mellette County, as well as the city of Mellette in Spink County, are named for him.

Mellette was the first governor to be honored by the Trail of Governors. The life-size bronze statue by John Lopez was unveiled in 2012. The statue portrays a casual, confident Mellette, leaning forward as if he is considering the future of the new state. Mellette is looking down Pierre Street towards the undeveloped land west of the Missouri River. Mellette’s statue was placed the following year along Capitol Avenue on the grounds of the Hughes County Courthouse, which was the site of an earlier courthouse that also served as South Dakota’s first state capitol building.