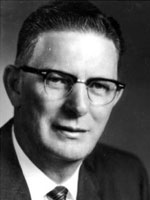 Archie Gubbrud was born on his family’s farm in Lincoln County, the grandson of Norwegian immigrants. He attended rural schools and graduated from Augustana Academy, a Lutheran high school in Canton, and continued to work on the family farm. In 1939, he married Florence Dexter, a fellow Canton native, and they had two children, John and Maxine.

Gubbrud “inherited” his father’s position as Norway Township clerk in 1934 and held that role for 16 years. He also served as school board chairman. In 1951, he began a ten-year career in the State House of Representatives, serving as House Majority Leader and Speaker of the House. In 1960, Gubbrud challenged Governor Ralph Herseth’s reelection, and achieved a narrow upset win despite suffering a fractured pelvis and conducting much of his campaign on crutches.

Governor Gubbrud signed legislation prohibiting racial discrimination in the public accommodations. He approved large construction programs at the state universities and oversaw construction of the interstate highway system in the state. Gubbrud advocated for a constitutional amendment to provide for annual legislative sessions, created the office of the budget director, and created retirement systems for university and local government employees. He also established Custer State Hospital, a residential facility for the developmentally disabled, at the site of the former State Sanatorium for Tuberculosis.

After two terms in office, Gubbrud returned to his farm in 1965. In 1968, he was drafted by Republicans to challenge U.S. Senator George McGovern, but lost. The following year he was appointed as the Farmers Home Administration director for South Dakota, a position he held for eight years. Gubbrud died in 1987.

Gubbrud was honored by the Trail of Governors in 2019.  The life-size bronze statue by sculptors Lee Leuning and Sherri Treeby portrays Gubbrud observing a model of a Minuteman missile, dozens of which were installed in South Dakota during Gubbrud’s tenure.  The sculpture was placed in the capital city at the corner of Pierre Street and Capitol Avenue.