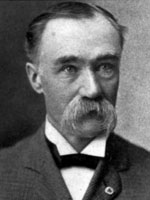 Andrew E. Lee was born in Bergen, Norway in 1847 and came to America with his family when he was four, settling on a farm in Dane County, Wisconsin. Lee came to Dakota Territory in 1867 and formed a mercantile partnership with Charles Prentis in Vermillion in 1869. The business operated for over forty years and made Lee one of South Dakota’s wealthiest citizens. In 1872, Lee married Annie Chappell and they had one daughter, Jessamine.

Lee served on the Vermillion city council and as mayor of Vermillion. In 1896, Lee was nominated for governor by a “fusion” ticket supported by Populists, Democrats, and a faction of pro-silver Republicans led by U.S. Senator Richard F. Pettigrew. Lee was elected governor by 319 votes, the closest margin for governor in state history, and was reelected on the Fusion ticket in 1898 by 370 votes, the second-closest margin.

Governor Lee struggled to enact much of his populist agenda, as the Populists and Democrats struggled to translate a successful election alliance into an effective governing coalition. Despite that, Lee had some successes. He strongly backed the creation of the initiative and referendum process, which voters adopted, making South Dakota the first state to do so. He created an agency to regulate and examine insurance companies, and made the State Railroad Commission, the precursor to today’s Public Utilities Commission, elected rather than appointed offices. Lee also authorized construction of Northern Normal School in Aberdeen, the School for the Blind in Gary, and a state hospital in Redfield.

During the Spanish-American War in 1898, Governor Lee contributed from his personal fortune to outfit the South Dakota National Guard unit that was mobilized and deployed to the Philippines, but he became a critic of the war when the troops remained overseas once the conflict ended.

After two terms as governor, Lee ran unsuccessfully for U.S. House in 1900. He was the Democratic nominee for governor in 1908, losing to Robert S. Vessey, and also received the votes of Democratic legislators for U.S. Senate in 1907 and 1909.

Lee retired to Vermillion and, following the death of his wife Annie, he married Myrtle Shepard in 1920. He died in Vermillion in 1934, one day after turning 87, and was buried in Vermillion. Lee’s nephew, Carl Gunderson, followed him to the governor’s chair, and the Lee Medical Building, home of the USD Sanford School of Medicine in Vermillion, is named in his honor.

Lee was honored by the Trail of Governors in 2022.  The life-size bronze statue by sculptors Lee Leuning and Sherri Treeby is placed in Pierre’s downtown business district near the intersection of Pierre Street and Missouri Avenue.  The statue evokes Lee’s career as a merchant and his role in securing the state treasury following its theft, as Lee leans on two bank strongboxes, a revolver in his waist pocket.