Join us Friday, June 15 at 10am as we unveil these statues in the Capitol Rotunda in Pierre.

The year 2016 was historic for South Dakota’s Trail of Governors as the foundation reached the half-way point with 15 bronze statues – half of our former governors’ images. We celebrated this milepost of the journey on this Trail since beginning six years ago with zero dollars and a handful of volunteers. Progress continues to rely on volunteers from board members to underwriters, artists to historians, advisors to donors.

Click here to view the 2016 Trail of Governors Annual Report

Established in 2010, the Trail of Governors Foundation is committed to honoring South Dakota’s chief executives in a unique and lasting manner. 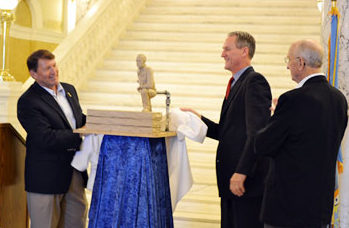 While the physical trail is located in South Dakota’s state capital, the project has brought partners together from across the state and beyond its borders.

The foundation has commissioned South Dakota artists to create life-sized, bronze statues of the state’s past governors. A minimum of three statues will be erected each year and the “Trail of Governors” will connect the state capitol and the Missouri River. The foundation is relying entirely upon private donations and corporate underwriters to fulfill its vision. Dakota Prairie Bank and Leroy and Charlene Foster are providing interest-free loans to underwrite a portion of this project and up to four sponsors are needed to fund each statue. The South Dakota Community Foundation is also a project partner and all donations are tax-deductible. Up to four sponsors are needed for each South Dakota governor and donations are tax-deductible.

The governor statues will follow the timeline and order established working from outside inward, i.e. the first year’s statues will include an early governor (Mellette) and a recent governor to leave office (Miller), as well as a mid-timeline governor (Bushfield). Collectively, the artists have the ability to do up to six statues each year. Thus, additional governors may be moved up within the timeline provided a sponsor comes forward with full funding. A timeline for the creation of each statue may be found here.

This is a truly unique and South Dakotan way to honor our state’s leaders. We hope this project will spark your interest and we hope you will contact us with any questions or comments you might have. In the meantime, we ask you to check back occasionally and follow the progress! Thanks again for stopping by and enjoy our website! 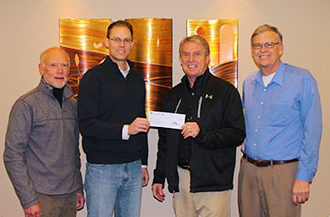 Bob Schmidt of Farm Credit Services of America presenting a $17,000 check to Buddy Seiner of the SD Community Foundation for Governor Joe Foss to be completed in 2017. With Trail of Governor’s Foundation board members Chuck Schroyer & Leroy Foster. 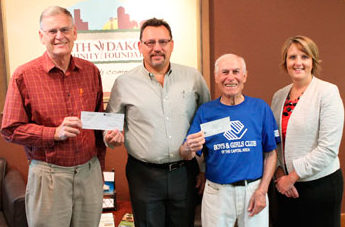 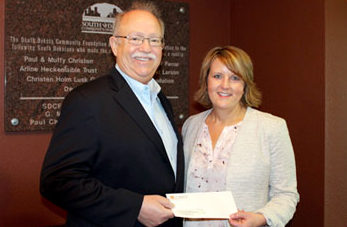 check to Stephanie Judson of the SD Community Foundation for Governor Nils Boe to be completed in 2016 in honor of his dad Charles Burke II.

Three new governors to join the trail in Pierre

PIERRE, S.D. – The South Dakota Trail of Governors Foundation will host the unveiling of three statues honoring the state’s past governors at 1 p.m. CDT on Friday, June 12 in the Capitol Rotunda at Pierre.

Gov. Herreid had close ties to the South Dakota communities of Leola, Eureka and Aberdeen where he lived. Gov. G.T. Mickelson was born in Selby and had business interests there both before and after being elected governor. Elkton, Arlington, Salem and Sioux Falls are towns Gov. Kneip once called home. Individuals from all these communities are expected to attend the ceremony. Many Mickelson and Kneip family members as well as friends and donors will witness the unveiling of the statues.

Gov. Dennis Daugaard will speak at the event, as will Pierre Mayor Laurie Gill, and the South Dakota artists creating the sculptures will share what inspired their vision of each leader. The new statues will be added to the trail which begins in downtown Pierre and follows a path to the state’s Capitol grounds. Gov. Herreid’s statue will be placed in the downtown Pierre area while the Gov. G.T. Mickelson and Gov. Kneip bronzes will be at the Capitol grounds, installed during the month of June. These life-size bronzes will bring the total number of governor statues along the capital city’s trail to 12. The project honoring the state’s chief executive officers is the only one of its kind in the United States.

The Kneip and Mickelson statues are fully funded, while donors for Gov. Herreid’s statue are being sought. Each statue requires a donation of $68,000 and those contributing one-quarter ($17,000) or more receive name recognition on the statue’s plaque for the governor they honor.

The foundation’s board is made up of a small group of volunteers who started the project in 2011. Donors from across South Dakota and several states have contributed a total of $910,000 so far, as well as $500 for an endowment fund. The S.D. Community Foundation provides funding guidance and oversight.